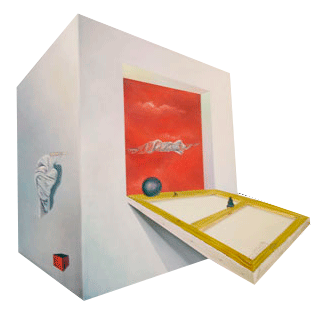 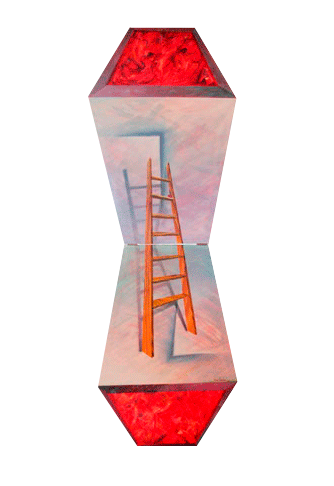 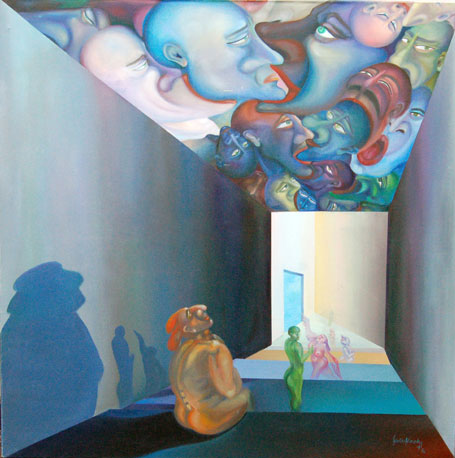 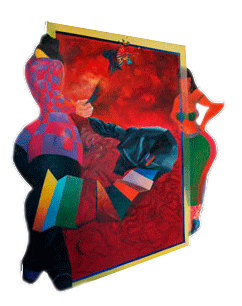 From the real vanishing to the virtual (1993) 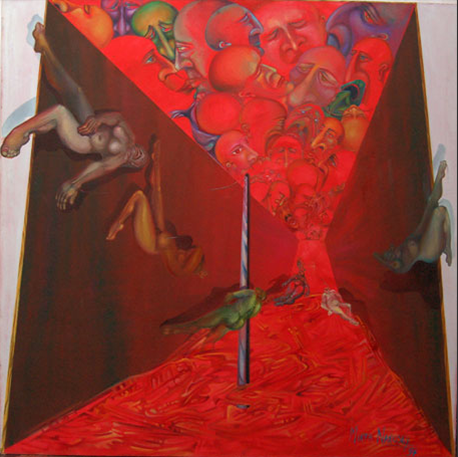 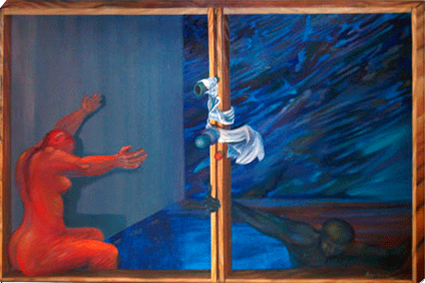 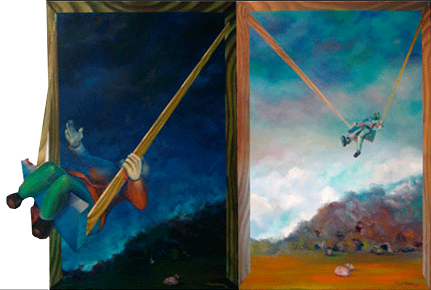 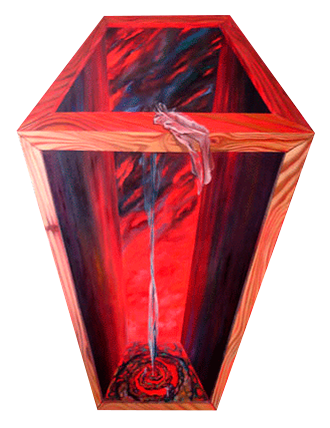 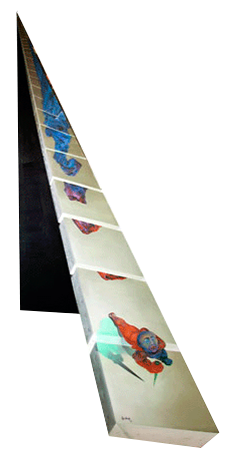 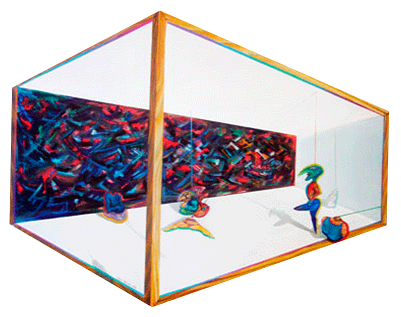 We are puppets in virtual scenography (1998) 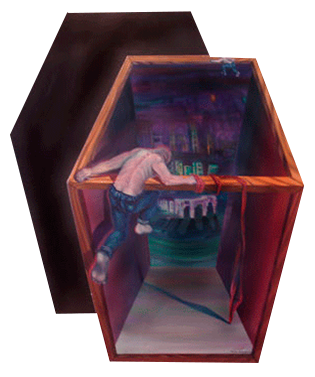 Climbing to a virtual structure (1997) 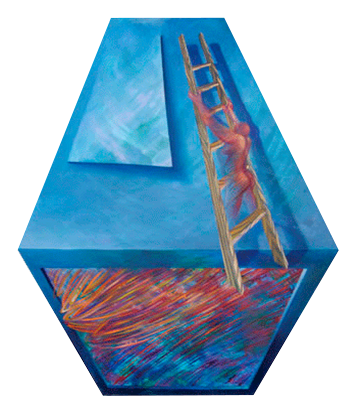 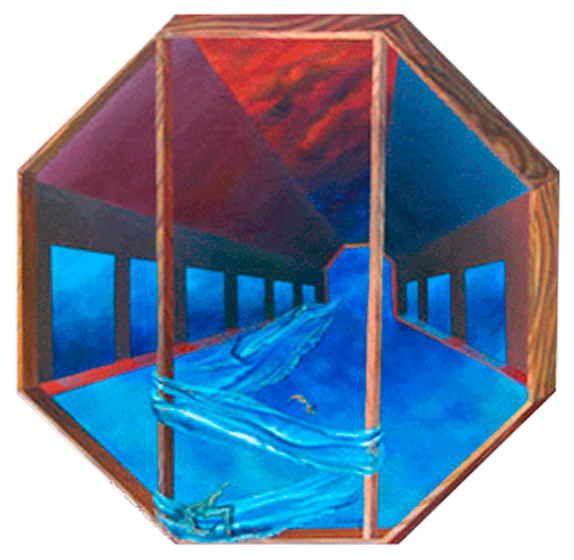 “In this series of work my purpose is to generate more virtual that potential in a rectangular or square surface areas. My search is driven by the internal conviction that reality is ambiguous; it should be relativized values, as are hundreds of vital alternatives. Beliefs, attitudes towards life, ideologies are multifarious and many of them lead – in various ways – to happiness. If there is one truth we are not able, as human beings we are, to rule those who possess it.
What we see is not necessarily what “is”.
To trick the reading I play with cut perspectives, projected shadows, outgoing volumes, using the sides of the frame and creating fictitious sides. But without never leaving the plane. Tricking the eye and showing that everything that ordinary vision thinks real, it is not.
That is the challenge I pose in this series of works born by the end of 1992 and do not know until when, or where it will lead me. “

The approach to the real is still a few years to complete the century, exploration reason and why not? of amazement. After centuries of living under characteristics not largely varied representation established canons, humanity tends to want to meet with deeper areas of knowledge.
Art and science, in various ways, cuddle conclusions that cannot be ignored: the real and the virtual come together in an unexpected and disturbing universe. It is logical that today’s artists want to express their doubts and searches through new expressive attempts.
It is somehow what Mirta Narosky is seeking with cut shapes, their “outgoing volumes” or paths and surfaces that materialize their fiction or, rather, its illusory projection. Within the framework of figuration, the artist shapes her themes where a certain symbolic and literary bias articulates with expressive features, identified strongly with images detached from subsidiary camps expressionism of the eighties.
Anyway, Mirta Narosky speech is presented as adjacent to a position that requires in redirect fundamental statements about the life and destiny of man. Not from a philosophical point of view, but artistically and characterized by a significance that always takes us back to the aesthetic field.
By this I mean that the author does not try to do rhetoric, but simply venturing into the very fertile valley and is fraught with uncertainty contemporary society, armed with both a pictorial language that is its communicative dimension.
Her creativity is adjusted by a manifest ambiguity and perceptually think the plastic volume management and non-conventional media, is an appoggiatura to maintain ideological experience that her painting brings development.
From this point of view, Mirta Narosky has inserted in a personal way and at the same time firm, in the endless attempts to recover these oblique fact emanations which holds the human condition.

Mirta Narosky pictorial speech is represented by the world of opposites. The cosmogony of the images of the real and the virtual is founded on a successful symbiosis.
The dual role of the realities and unrealities becomes very noticeable in the whole series. The artist in her proposal introduces us to a real, dreamlike and magical world: the atmosphere is enveloping and variegated. And predominates a dramatic and turbulent space …
Plays with the shapes of the work – A kind of trompe l’oeil – …
Excellently accomplished Mirta Narosky’s twice game presents us in her work. In addition to this the remarkable mastery of drawing. At times near the surrealism, the artist is undoubtedly within the current esthetic, in the strange intersection between the imaginary and the reality.

Media spaces: Mirta Narosky and the art of the end of the century – Graciela Ferrás – Sociologist

… And that art “committed”, from the “painters of the soul” (in the words of Mirta Narosky) uses the creativity of new codes to subvert and question the superficiality of textures in vogue …
… The mix of suggestive oneric landscapes  reminiscent of surrealism, with bodies in the interests of expressionism suggest an aesthetic as a “pastiche”, the use of irregular frames that look fun illusory three-dimensional effect as a trompe l’ oeil transcend the limits of the work itself constantly invading the environment of the viewer, giving the illusion of virtually, new scopic regime of postmodernism, denunciation of “non-place” …
… Instability and metamorphosis of forms and figures, denouce the new social aesthetic “neo-baroque” monstrous characters stripped of their ethical and aesthetic values, in ??constant mutability of its forms make the social instability of the current situation. Erotic structure of the work, yes, but with bodies disembodied, phantasmagoria of forms that allude to other forms, effect of optical illusion that merges the real and the virtual, going beyond the imaginary, almost at the edge of the drill .. .
… Poli dimensionality, unsteadiness, metamorphosis, characterized the work of Mirta Narosky in a fierce creative search for ways to open new space / time for a new era of sensitivity …